Pop quiz: What is the most prevalent source of renewable electricity in the U.S. today? Hint: the answer might blow you away. Wind power is on the rise thanks to its many advantages and benefits—both economical and environmental. 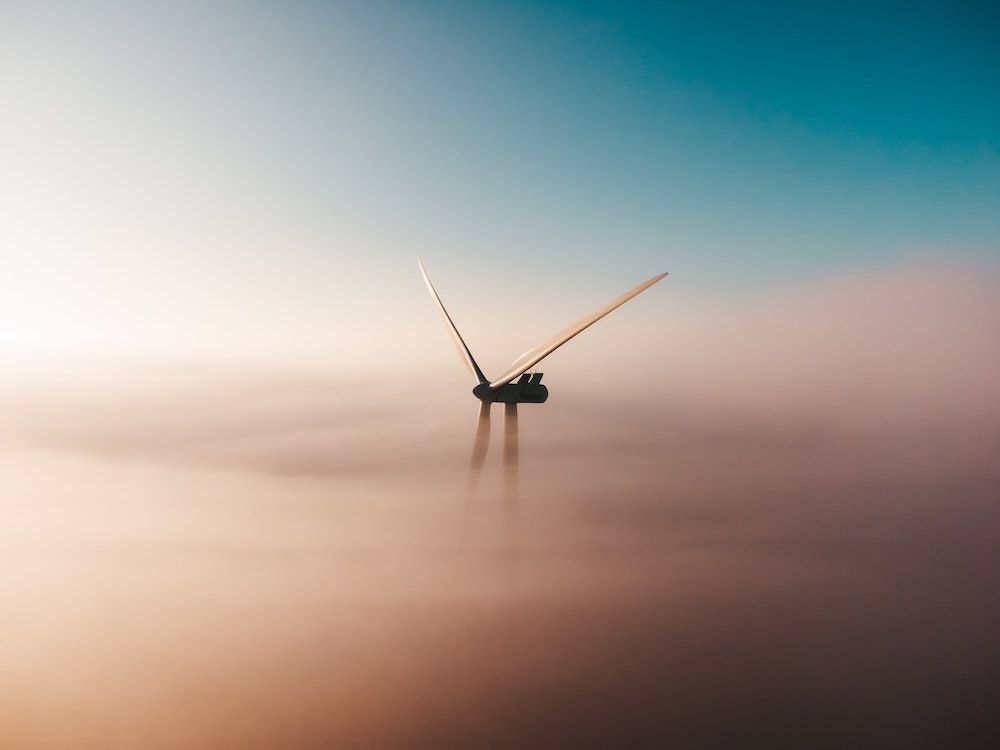 In 2020, renewables accounted for more total electricity generation than coal for the first time on record. In other words, the renewable revolution is well underway. And paving the path?

We tend to hear a lot about the benefits of solar. For good reason: the solar industry is booming and for many homeowners, solar is more suitable and accessible than other renewable sources like hydro, geothermal, and wind.

But wind has played and will continue to play a crucial role in paving the way toward a collective clean energy future. Below, we’re diving into the pros and cons of wind energy to fully understand why the outlook is promising.

What is wind energy?

Relative to other renewables, how wind energy works is actually fairly straightforward.

In fact, if you’ve ever seen a wind turbine, then you have a sense of what wind energy is. Quite simply, wind energy refers to electricity created from the wind.

Wind power is generated via massive wind turbines that collect the kinetic energy of the wind through rotor blades. When the wind blows, it turns the blades of a turbine which captures the aerodynamic force of the wind and uses it to power a generator that produces electricity. That electricity is then sent through wires—in the case of residential wind turbines, directly to a home—or to the electric grid where it is then redistributed by utilities to homes and businesses across the U.S.

Like many renewables, wind is a variable energy source, meaning it only produces energy intermittently (when the wind is blowing) rather than on demand. Still, one large turbine can produce a lot of energy every year. In fact, an average-sized wind turbine can produce enough electricity to power a home for a whole month in just under 100 minutes of operation.

What are the advantages of wind energy?

Like all renewables, wind energy claims a variety of advantages not only over fossil fuels, but also over other renewable energy sources. Here are some of the biggest benefits of wind power.

Wind energy is a clean energy source—the electricity it generates is free of greenhouse gas emissions. Once a turbine is built, it can entirely be powered by the wind, meaning it doesn’t have any emissions. And all the energy that it generates can be distributed across the electric grid, greening the overall electric supply. Moreover, wind is an abundant energy source, enabling it to provide substantial power supply to the electric grid. Although wind energy cannot be generated on demand, it can still generate enough electricity to power thousands of homes, businesses, and communities across the country every year.

Another major benefit of wind energy is that it’s highly cost effective. While wind turbines can be relatively expensive to install, they can easily make up that upfront investment due to their low maintenance and operation costs. Wind’s levelized cost of energy (LCOE) is lower than many other renewables and significantly lower than coal and gas. Wind costs just an average of $0.01-0.02 per kilo-watt hour generated. These low costs are not just good for investors looking to invest in the wind industry, but they’re also helping to lower the cost of energy for residents too.

The price for wind energy continues to decrease as technology improves

As technology improves, the cost of wind is dropping. A 2019 study found that the cost of onshore wind had dropped by 27% since 2013, and that trend is anticipated to continue. In fact, this is a trend that is widely common across the entire renewables industry. In 2021, renewables officially became the cheapest energy source on earth. In many markets, it’s now cheaper to build and operate a new wind or solar farm today than it is to continue to operate an already existing coal plant. This drop in price is largely due to improvements in technology which have lowered installation costs as well as operation and maintenance costs.

Turbines are an efficient use of land

Although wind turbines are massive, they take up a relatively small amount of land space. It’s entirely possible to build a wind turbine on a farm and still maintain the agricultural value of that land.

Installing wind turbines has become popular in agricultural regions of the country as a way to receive consistent income every year. Wind turbines provide a steady stream of income that can help farmers navigate the unpredictability of farming. As droughts, floods, tariffs, and fluctuating prices have become commonplace for farmers in recent years, wind energy has allowed farmers to persevere through the uncertainty. Wind energy has also helped boost the tax base in rural regions which has helped revitalize the economy in those areas, helping to fund things like new schools and new public work facilities. Installing wind turbines has also helped create jobs in these economies.

What are the disadvantages of wind energy?

It’s a variable energy source (it needs wind to work)

One of the major disadvantages of wind energy is that it is a variable energy source, meaning it cannot be generated on demand. Wind farms are dependent on wind blowing, which means on their own, wind farms are not a suitable solution for a sustainable and reliable energy grid. That being said, energy storage technology continues to improve and become more cost-effective, which is helping to stabilize energy supply and demand. For the time being, electrical grids require additional sources of power to supplement the times where energy demand is high, and the wind isn’t blowing.

Not the most aesthetically pleasing

Some people don’t like seeing turbines in the landscape. Their big rotors take up a lot of space and many claim that they’re an eyesore. Another major complaint when it comes to wind turbines has to do with the flickering shadow they cast as their blades rotate. This flickering shadow can be disturbing to both people and animals.

Turbines can be loud In addition to potentially being an eyesore

wind turbines are also fairly loud. As the rotors get spinning, they produce a lot of residual noise which can be disturbing to locals who live nearby wind farms. It’s important that wind farms are carefully designed and properly spaced out from residential homes to ensure that noise isn’t a major issue.

Construction can cause local disturbances

Can negatively impact local wildlife if not carefully designed

Wind turbines have been shown to be disruptive to some wildlife, particularly bats and birds and even some plants. Constructing wind turbines can have adverse effects on land that can affect the wildlife that previously lived in those areas. Offshore wind turbines also can potentially have a negative impact on sea-environments, disrupting fish habitat.

How much energy does a wind turbine produce?

The amount of energy that a wind turbine can produce depends on several factors including the size of the rotors, the type of wind turbine, and, of course, the amount of wind that’s blowing. Newer designs with larger, more aerodynamic rotors will generate more energy when the wind is blowing than smaller, less efficient turbines. Offshore turbines typically generate more energy than onshore turbines, partly because the wind is more consistent at sea versus on land.

According to the U.S. Geological Survey (USGS), the average wind turbine in the U.S. produces around 400,000 kWhs of electricity per month when operating at 33% capacity. This is enough energy to power 450 homes with the average monthly electricity usage (893 kWhs). The output is calculated at 33% because wind turbines typically cannot convert 100% of the kinetic energy they harness into electricity—they operate at around 30-50% of their power efficiency rating.

The most efficient wind turbine on the market is called a three-blade horizontal-axis wind turbine (three-blade HAWT). Hundreds of thousands of these turbines have been deployed across the world. In addition to having very efficient blades, these turbines are also controlled by computers to face the optimal direction to harness the power of the wind, no matter what direction it is blowing. As technology advances, wind turbines are getting more efficient, able to convert wind into electricity more effectively.

One of the major pros of wind energy is that it is relatively cheap to produce. While it can be expensive to build and install both onshore and offshore wind turbines, the maintenance and operation costs of generating wind energy is remarkably cheap.

In 2019, the average cost of building and operating a new solar farm was roughly $0.053 per kilowatt-hour, with the range varying depending on the region between $0.051 and $0.099 according to the Internation Renewable Energy Agency. These prices have dropped by 44%-78% across different regions and markets since 2010, and that trend is expected to continue as technology improves and operation costs decline. Just the cost of installing onshore wind turbines has decreased by hundreds of dollars per kilowatt-hour since 2013. Offshore wind is typically a bit more expensive per kilowatt-hour due to the higher cost of building these turbines.

Does wind energy cause pollution?

Generating wind energy is emissions-free and has a relatively low impact on the environment in comparison to other energy sources. In almost all cases, operating a wind farm does not contribute to pollution and helps to reduce carbon emissions by mitigating the need for coal and gas plants to generate electricity.

The only major emissions and pollutants generated from wind energy come from the manufacturing and construction of the turbine. That being said, the overall environmental footprint of manufacturing, building, installing, and operating a wind turbine is considered to be low. Once erected, they even take up very little ground space, and the habitat that was disrupted during the construction process can be revitalized.

The future of wind energy

The future of wind energy is bright. Many experts predict that wind energy will be an abundant and affordable source of energy by 2050. As technology advances, the cost of installing and operating wind turbines will continue to decrease. At the same time, wind turbines will also become more efficient, allowing them to convert more wind power into usable electricity. This means more affordable, cleaner electricity for homeowners and businesses.

Additionally, technological and scientific advancements can mitigate some of wind energy’s current disadvantages. Tech innovations have already led to new wind turbine designs that are less unsightly and, in some cases, can even capture wind indirectly in ways outside of the wind blowing—such as from the air displaced by a driving a car.

The benefits of the wind industry extend beyond just increasing the amount of renewable energy generated across the electrical grid too. The wind industry is predicted to generate 600,000 manufacturing, maintenance, and installation jobs by 2050. Wind energy also helps stabilize energy prices, and as wind becomes more popular and prevalent, it should help reduce the occurrences of rate spikes and volatile electricity prices. In summary, wind is well-positioned to play a crucial role in our renewable energy revolution.