Solar farms, also referred to as solar parks, solar gardens or more formally photovoltaic power stations, are growing in number and popularity across the U.S. thanks to the benefits they bring to states and residents in the form of savings on your electricity bills. They can vary in size, shape, type, and purpose. Here's the low-down on how solar farms work. 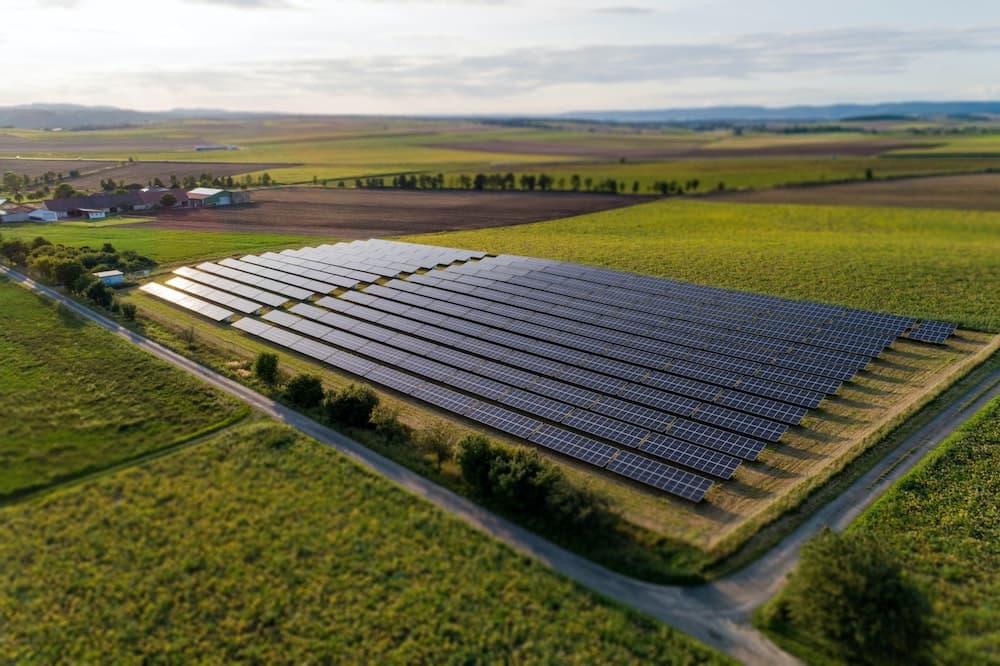 Imagine you’re taking a weekend drive through the countryside. You pass wooded areas and farms growing corn, wheat, and vegetables. Then suddenly, off to one side, you see a field filled entirely with freestanding solar panels. What could that be?

That field is also a farm—a solar farm. Instead of producing food, it produces energy for local homes and businesses.

Passing a solar farm on a Sunday drive has become a lot more common over the last few years. From 2014 through 2019, the U.S. added between 200 and 300 new solar farms each year. Solar farms in the U.S. now generate more than 85 gigawatts of electricity per year, enough to power 16.5 million homes. And while most of this power comes from utility-scale installations, a growing share is from community solar facilities. Community solar farms provide beneifts to states and neighborhoods in the form of cleaner energy, less pollution, and electricity savings for residents.

What is a solar farm?

A solar farm is a big array of solar panels that supplies electricity to the grid. These facilities can also be called solar parks, solar gardens, solar power stations, or more formally photovoltaic (PV) power stations.

Some solar parks make use of space on top of apartment buildings or public buildings like parking garages. However, in most solar farms, the PV panels sit directly on the ground. This type of solar farm requires a fairly large open space to build. Some solar farms are also actual agricultural farms where some of the fields contain solar panels instead of crops, or the solar panels are integrated into the agricltural land. Solar farms can also go on former industrial sites or capped landfills.

What are the different types or models of solar farms?

Solar farms vary widely in size and shape. The world’s biggest PV power stations produce over 2,000 megawatts (MW) of power, while the smallest ones produce less than 1 MW.

Utility scale solar farms are generally larger than community solar farms, typically producing 5 MW of power or less. They contain thousands of individual solar panels spread across acres of land. Because these PV power installations are large enough to see from an airplane, their designers sometimes arrange the panels to form interesting shapes. For instance, Walt Disney World gets power from a solar farm shaped like Mickey Mouse.

Utility scale solar plants operate in one of two ways. Some of them are the property of an electric utility. The utility delivers the plant’s power to the grid and sells it to homes and businesses at retail rates. Other plants belong to private companies that sell the electricity they produce to utilities through power purchase agreements (PPAs). The utility then sells the power on to its customers.

The companies that own solar power plants often invest in features to maximize their energy production. For instance, they may fit the PV panels with solar trackers. These devices adjust the position and angle of the panels throughout the day, allowing them to capture more sunlight. They may also add power storage features, such as batteries, to store solar energy for later use.

Some solar power plants don’t rely on individual solar panels at all. They use a system called concentrated solar power, or CSP. CSP uses mirrors to focus sunlight and create heat. This heat produces steam to turn a turbine and generate electricity. The heat produced by CSP can last even after the sun has gone down, allowing these plants to keep producing power at night.

Utility-scale solar farms deliver their power to the utility, which sells it to customers. Community solar farms are different. These smaller facilities have contracts to sell their power directly to homes and businesses within a given community.

Though this doesn’t mean that the specific solar electrons they generate go only to these homes and businesses. The solar farm's power goes into the grid, and the solar farm's customers, called "subscribers," draw their power from the grid.

As a community solar subscriber, you receive a portion of the solar credits that the farm generates. Thanks to state renewable energy incentives, solar farms' power generation gets turned into monetary "credits" which can be distibuted to the farm's subscribers directly on their utility bills. Because solar farms are almost always connected to the local utility company, subscribers see those credits applied directly to their existing monthly bills. So for example, if your subscription is worth $100 in solar credits in a given month, you'd see a $100 deduction on your electricity bill.

That doesn't quite mean that you save $100 that month, though. Separately, you may receive another bill from the solar farm's management or servicing company. This is a bill charging you for the credits, but at a discounted rate. So in that $100 credit example, you may then a pay $90 to the solar farm's servicing company. Overall, you net out with $10 in savings on your electricity bill. Expand that month over month, and the savings can add up.

Community solar has major benefits for its customers, or subscribers. It allows you to participate in the clean energy movement and enjoy the cost-savings of renewable solar power without installing your own rooftop solar panels. This makes solar available to renters and people who can’t afford the up-front cost of a solar array. And it saves you money on your electricity bills at the same time.

But community solar benefits everyone else in the area, too. It improves public health by reducing dependence on dirty, polluting fossil fuel plants. It also makes the grid more stable by spreading out power production.

It can even help lower your bills indirectly by reducing the utility’s costs. With a solar farm adding energy to the grid, the utility doesn’t need extra power plants to meet peak demand. Also, community solar is a type of distributed generation—producing power at or near the site where it will be used. Generating power this way reduces wear and tear on the grid.

Curious if there's a community solar program in your area? Check out Perch >

The process of building a solar farm

To build a solar farm, the first requirement is land—quite a bit of land. PV power stations take up more room than most kinds of power plants. They need space for the panels themselves, other equipment such as inverters, and space to access the equipment for maintenance. Typically, they require at least 100 square feet per kilowatt (kW), or 2.5 acres per MW, for the panels alone. Add in space for other equipment, access road, and setbacks, and a solar farm can need anywhere from 5 to 10 acres per MW.

Not just any plot of land will do, either. It has to be close enough to power lines and electric substations to connect to the power grid. It has to be flat, clear, and not at risk of flooding. Local zoning regulations have to allow this use of the land. And, of course, it has to get plenty of sunlight.

Most solar farms are on privately owned land. However, building one requires approval from various state and local government agencies. Developers must provide detailed construction plans and do studies to show the project won’t harm the environment. Overall, the approval process, called siting and permitting, can take three to five years. But once the project is approved, actual construction can take as little as a few months.

The cost of building a solar farm depends on its size. A good estimate is around a dollar per watt. That comes to $10 million for a 10-MW solar park. That sounds expensive, but it’s actually more cost-effective than a rooftop solar system, which costs $2.50 to $3.50 per watt.

Your questions about solar farms, answered

If you see a solar farm going up in your area, you probably have some questions about it. You might wonder about how long it’s likely to be there or whether it poses any danger to you or to the environment.

Here are the answers to those questions.

How long do solar farms last?

Solar panels wear out and become less efficient after about 25 years. However, even at reduced efficiency, a solar farm can operate for 30 to 40 years. After that, the land can be re-leased as a solar farm with new panels, or it can go back to its original use.

Solar farms don’t have as long a lifespan as some other types of power plants. Coal and gas plants can run for around 50 years, nuclear reactors for as long as 80 years, and hydropower dams for 50 to 100 years. However, solar farms stack up pretty well against wind farms, which last 20 to 30 years. And of course, any form of renewable energy power generation is better for the planet than that of fossil fuels like coal and oil.

Is it dangerous to live near a solar farm?

In a word, no. Solar farms do not pollute the air and water like fossil fuel plants. They aren’t noisy, they don’t smell bad, and they don’t block out the scenery. However, like any power plant, they must be fenced in to keep people away from the high-voltage electrical equipment.

Some solar farms are non-profits or co-ops formed by neighbors. Their goal is to produce clean energy and fight global warming, not to make money. However, other solar power plants are for-profit businesses.

According to Leverage, the average return on investment for a solar farm is between 10% and 20% to the owner. That’s enough to pay off the cost of building it within five to ten years. After that, it can continue making money for up to 30 years.

Are there subsidies available for solar farms?

Are there any problems with solar farms?

Overall, solar farms are good for the environment and for society. However, they have some potential problems that developers must work to overcome. These include:

Expect to see more solar farms in the future

To avoid catastrophic climate change, the world needs to replace fossil fuels with clean, renewable energy as fast as possible. That means solar farms are sure to be a bigger part of the landscape in the future. Passing by one on a weekend drive—perhaps in an electric car fueled by that very solar park—will be an everyday occurrence. And every time you do it, you can give those solar panels a little wave and thank them for all the cheap, clean power they provide to you and your neighbors.