In case you missed the UN’s 2021 climate conference, COP26, we’ve summarized the key takeaways for you to know. 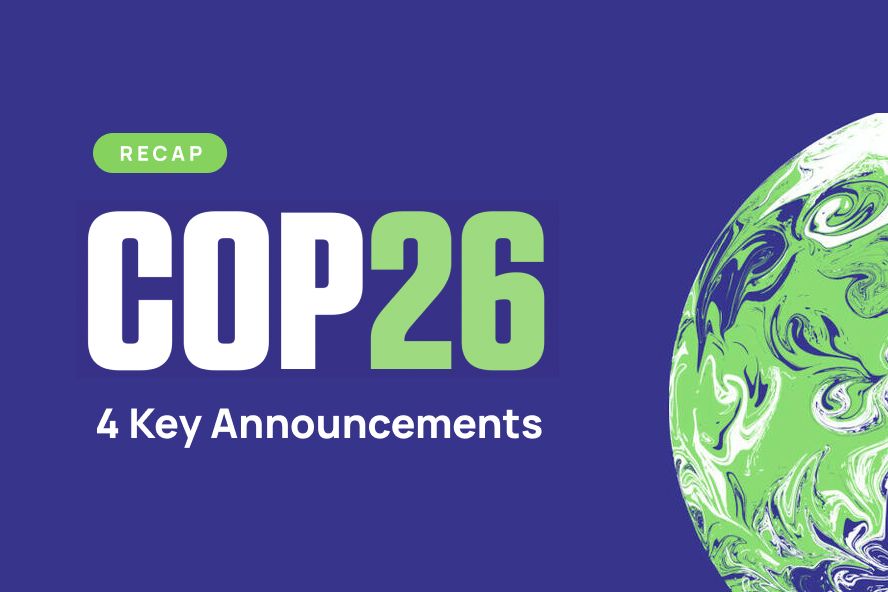 Last week, thousands of world leaders, diplomats, activists, and business executives met in Glasgow, Scotland to discuss the climate crisis. As the first global climate conference since the COVID-19 pandemic, this year’s UN Conference of the Parties, COP26, had a buzz to it—fueled equally by anticipation and urgency.

6 years out from the Paris Climate Agreement, the world is facing a stark reality about our climate: if we don’t take swift and drastic action to reduce our greenhouse gas emissions, many of us will face severe climate disasters. We’ve already seen this play out in recent years as forest fires, droughts, storms, and loss of species have devastated our earth.

Although many scientists and climate experts believe it is still possible to achieve the climate goal established in the Paris Agreement—to prevent earth temperatures from rising 1.5˚C—they also warn that this will take diligent and coordinated action by all our world leaders and governments. And so far, we aren’t doing enough. The record levels of CO2 measured in the atmosphere this year despite a decrease in emissions in 2019 is a harsh reminder.

With these warnings in mind, leaders, scientists, and activists from all over the world met for two weeks to discuss issues such as carbon markets, methane, coal, and climate finance. In case you missed it, we’ve summarized 4 key announcements and takeaways from the conference below.

Here’s what you need to know about this year’s annual UN climate conference, COP26. 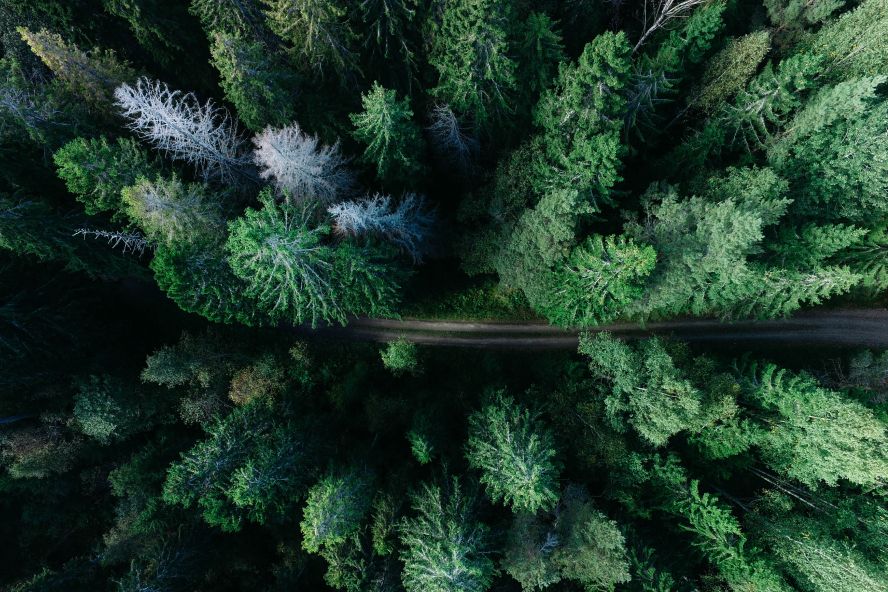 One of the first big commitments to come out of the COP26 was a pledge by over 100 nations to end deforestation by the year 2030. If accomplished, this pledge would protect over 85% of the world’s forests. These nations include the U.S., Brazil, Russia, Canada, and many more of the countries with the largest forested areas. This pledge was led by the U.K.’s Boris Johnson, who spoke about the importance of “end[ing] the role of humanity as nature’s conqueror, and instead, become nature’s custodian.”

Halting deforestation and reversing the effects of land degradation due to forest loss would have a massive impact on climate change. Not only do forests play a massive role in sequestering carbon, which helps reduce emissions, but they’re also key to protecting biodiversity and animal life.

The key with this pledge though will be follow-through. And some climate experts and activists are skeptical, especially given the failure of countries that have made similar commitments in the past to follow through. Still, there seems to be extra momentum behind this year’s deforestation commitment, especially as it is backed by $7.2 billion in private funding from companies and non-profits and an additional $12 billion in government funding to support land restoration and protection initiatives. Plus, it’s a good sign that countries with large areas of forested land such as Brazil have committed to this pledge as they figure to be key players in leading the global efforts to end deforestation.

The 2030 pledge to end deforestation is promising and has the potential to largely improve our chances of slowing global warming, but it needs to be backed by strong follow-through by the 100 nations who made the commitment.

Another major pledge coming out of the conference is a commitment by dozens of countries to cut their methane emissions by 30% by 2030. Reducing emissions of methane, which is among the most potent greenhouse gasses, is one of the most effective ways to slow global warming in the short term and to prevent the temperature from rising 1.5˚C over the next decade. Experts estimate that nearly 30% of the rise in temperature since the industrial revolution can be attributed to methane. Cutting methane will also help improve air quality which should lead to greater public health and even help to improve crop yields.

Although much of emissions talk usually centers around carbon dioxide, it is methane that is actually one of the most potent greenhouse gasses. Cutting methane emissions is predicted to have a sizeable impact in the near term on preventing temperature rises.

One of the easiest ways to reduce methane emissions is to prevent leaks from oil wells and gas pipes. This solution is a relatively low-cost and easy-to-implement solution that is central to the plans of most countries that made the commitment. Another solution is to reduce waste that ends up in landfills by increasing recycling and composting infrastructure—waste accounts for nearly 20% of all methane emissions. Cutting emissions from other sources, such as the agriculture and food industry, is a larger challenge.

Cutting methane emissions is regarded as one of the most effective and most accomplishable ways to slow global warming over the next few years. With many countries on board, including the U.S. and all the E.U., we’re hopeful that this commitment will not only be achieved but surpassed in the coming years. However, though methane is more potent than carbon dioxide when it comes to trapping heat (which is why it has such a direct impact on temperature), it also breaks down much more quickly than CO2. This means that cutting methane emissions is an effective but also a short-term solution.

80% of the people displaced by climate change are women and children. Or in other words, “climate change is sexist,” as one U.S. official put it during the conference,

This year, COP 26 hosted a day dedicated to the interconnection between gender and climate. Many countries took this day to dedicate resources toward gender-sensitive climate initiatives, including the U.S. who committed a total of $15 million to funds supporting gender equity and equality.

Climate change has a disproportionate impact on already disadvantaged communities. Communities who rely on their relationship to land and agriculture to support their livelihoods will face the brunt of the effects of warming temperatures, droughts, and other climate catastrophes. It is essential that as the world plans for the future, these underprivileged communities are not only included in the conversation but their voices and ideas are elevated as valuable contributors to the formation of those plans. Gender day at COP26 is a step in the right direction.

At Perch, we believe climate justice and social justice are intrinsically tied. The fight to protect our planet is also a fight for social justice. It’s well overdue that we start recognizing the growingly disproportionate impact that climate change will have on underprivileged communities who have historically had worse access to resources.

40 countries have pledged to phase out coal usage in the coming years, a commitment that demonstrates the growing momentum towards the end of coal. However, some of the major coal consumers in the world, notably India, China, and the U.S., failed to sign the pledge to phase out coal. Instead, the U.S., along with China, Canada, and New Zealand, pledged to stop funding overseas fossil fuel projects.

The end of coal seems to be a common theme in most climate action conversations these days. But the fact that the world’s largest coal users still cannot commit to phasing out coal demonstrates the degree to which the world is still invested in coal. That being said, all signs are pointing towards a coal-less energy future, and the willingness of the U.S. and other large coal players to stop funding overseas fossil fuel projects is a step in the right direction.

Like all of the pledges, energy experts and environmentalists are waiting to see how much follow-through there will be from the countries who made the pledge.

The good news is that as coal continues to lose its hold as the world’s main source of fuel for energy generation, the rapidly growing renewable industry is starting to fill in its place.

For more news and announcements from COP26, check out this helpful post from globalcitizen.org.