Why Flow Batteries Are the Hottest Tech For Clean Energy Storage

A flow battery is a rechargeable battery that features electrolyte fluid flowing through the central unit from two exterior tanks. They can store greater amounts of energy for longer periods of time, making them promising for renewable energy storage. 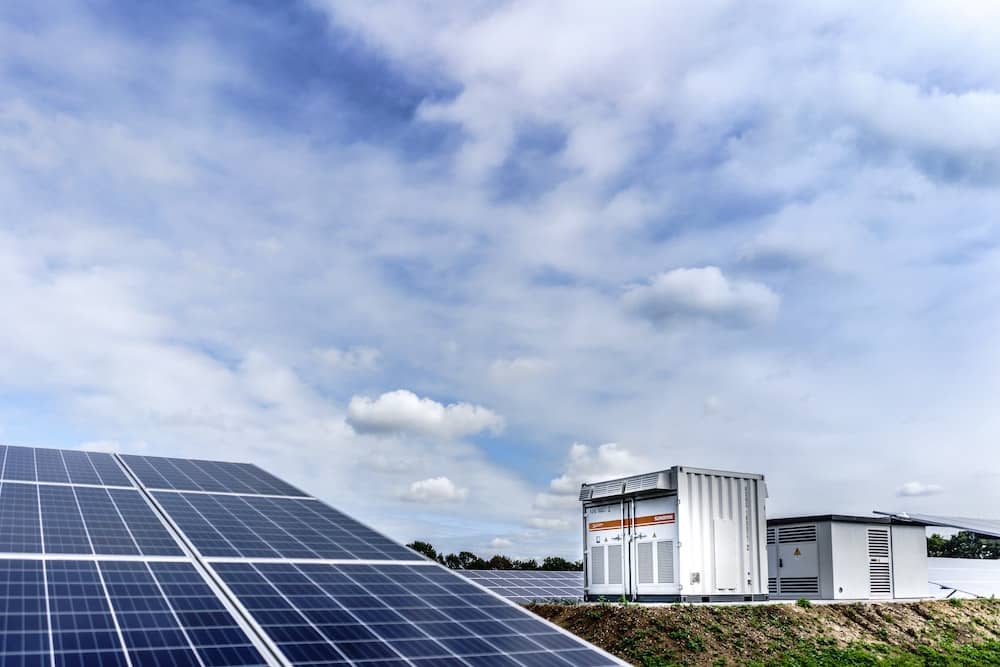 You may be familiar with the lithium-ion battery, used in everything from cell phones and laptops to Tesla electric vehicles. Lithium-ion batteries changed the energy game as a way to harness and store immense power density, especially considering their relatively small unit mass compared to other energy storage systems.

But in recent years, there's a new kid in the block with even greater potential for energy storage. That is, the flow battery.

Flow batteries can store greater amounts of energy for longer periods than other types of batteries out there.

While they’re currently being used in limited applications, the technology is advancing and has massive potential to become a major player in renewable energy storage across the globe.

What are flow batteries?

Ask those excited about flow batteries, and they’ll tell you they’re the best thing to come along since sliced bread—at least when it comes to renewable energy storage. That’s because flow batteries have many advantages over lithium-ion batteries currently in use (which we’ll cover in detail later).

For now, we’ll go with a quick explanation. A flow battery is a rechargeable battery that features electrolyte fluid flowing through the central unit from two exterior tanks.

It’s called a flow battery due to the flow of fluid through the divider in the central unit.

Since you’re sure to want more than the bare-bones explanation above, let’s get into how flow batteries work.

How do flow systems work?

As long as you don’t get pulled down into a rabbit hole of extraneous details, understanding how batteries work can be fairly straightforward.

This basic concept holds true for all types of batteries, although different batteries have variations on the theme.

In the case of standard alkaline batteries, all the components are housed within the main battery unit. The power output is low, and you typically need more than one alkaline battery to power anything larger than a computer mouse.

Once the electrons are depleted from an alkaline battery, the battery is dead and ready for proper disposal (of course!) based on ordinances in your area.

In the case of rechargeable lithium-ion batteries, all the components are still housed within the main battery unit. The power output varies, based on the size of the unit. To power larger devices, you need larger and/or multiple batteries.

Once electrons are depleted from rechargeable lithium-ion batteries, you can recharge them by restocking the electrons from an electrical current.

Lithium-ion batteries are currently the most common way to store energy from solar panels, wind turbines, and other renewable sources.

To store or use larger amounts of energy with lithium-ion batteries, you need to keep adding more batteries or increasing the size of the main battery units.

Flow batteries differ from other batteries in a few ways. The biggest difference is where the components are housed.

Instead of all components being housed inside the main battery unit, the anode and cathode are housed in tanks outside of the main unit.

The electrolyte fluid from the tanks flow into their respective chambers in the main unit, creating energy through the same type of chemical reaction found in other batteries.

The flow battery is also discharged and recharged the same way a lithium-ion battery is recharged.

What are the advantages of flow batteries?

The biggest perk of flow batteries is their ability to go big—really big—when it comes to storing and generating large volumes of energy.

Additional advantages of flow batteries include:

lithium-ion batteries can be highly flammable. Most flow batteries are not. Vanadium is a rare metal that’s used in some flow batteries, and it’s not known for its flammability, particularly when it’s dissolved in the flow battery’s fluid. Other flow batteries don’t use rare metals at all. The main ingredients in the fluid are water, salt, and iron.

Holds energy for the long haul

Even when flow batteries aren’t used for extended periods, they’re not prone to self-discharging. That’s because the electrolyte carrying the charge is held in its own separate tank.

In other types of batteries, the electrodes undergo chemical and physical changes that ultimate degrade the entire battery. Flow batteries feature a semi-permanent electrolyte and barely any electrode degradation. This allows for tons of discharging and recharging before any type of replacement is needed.

Any waste vanadium can be reused in other applications. Its composition stays the same, even as it travels between the negative and positive electrode tanks.

Flow batteries are not affected by charging issues that can decrease the lifespan of other batteries. These include:

What are the drawbacks of flow batteries?

With all the advantages for storing and releasing renewable energy, you may be wondering why flow batteries aren’t being used all over the place. That’s because there are still a few disadvantages that beg to be improved.

One of the greatest drawbacks is the cost. The estimated installed cost for a 4-megawatt-hour flow system was $551 per kilowatt-hour.

A number of factors make it tough to make a direct comparison with lithium-ion storage systems, such as lifespan and capacity. But a lithium-ion system could still be built for less.

Additional drawbacks of flow batteries include:

One of the factors driving up the cost of flow batteries is the materials used, namely the vanadium. A rare metal, vanadium can cost upwards of $20 per pound. That’s for commercial-grade vanadium that’s 95% pure. Upgrade to 99.9% purity and you’re looking at around $100 per ounce.

Although flow batteries do come in a variety of sizes, electrolyte tanks have to be really big to achieve a significant level of storage and power, especially since their energy-to-volume ratio is rather low. Really big means really heavy. Flow battery installations need to remain stationary in a single place.

Delays in getting required parts has been another drawback for some flow battery system manufacturers.

A solid example of a flow battery system in action comes from a project developed by ESS Tech Inc. in partnership with San Diego Gas & Electric.

The Oregon-based startup ESS delivered six flow batteries to the San Diego area. The batteries, which are housed in shipping containers, will be used to store electricity from a local solar array.

No word on the overall cost of the project, although ESS did say its goal is to reduce the cost by 2025 to $200 per kilowatt-hour. ESS uses water, salt and iron in its flow systems instead of costly vanadium.

Another ESS project is in conjunction with Oregon’s Portland General Electric. Named the "ESS Energy Center,” this project was developed to test and demonstrate flow system technology. Here the battery size is even larger than a shipping container. It’s the size of—and housed in—an entire building.

SB Energy Corp is purchasing a massive amount of batteries built by ESS, enough to power 50,000 homes across the U.S. for a day.

The batteries will be used on large-scale solar projects, allowing power plants throughout the nation to deliver electricity generated by solar power even after the sun goes down.

ESS is a strong player in the flow battery industry, but it’s not the only one.

California’s Central Coast Community Energy is partnering with microgrid builder Concentric Power Inc. to create three flow battery projects that are scheduled to launch in 2026. The projects will be using vanadium in their batteries. The cost was not disclosed.

Ask ESS Tech what barriers flow battery technology is facing, and the startup is likely to answer with a number: $5.7 million. That’s the loss reported by the company in the first quarter of 2022.

Although orders have been coming in, delays in getting parts have pushed order fulfillment dates into the future. Costs are high to build flow systems, even when companies like ESS use the iron, salt, and water in the fluid mixture.

Firms that use vanadium in their flow systems face even higher prices, thanks to the additional cost of the rare metal.

Costs may be big for flow batteries, but so is the impact they have on grid storage. And those impacts are big in a good way.

Flow batteries already have the ability to store large amounts of energy for extended periods. All this without self-discharging when there are gaps in use and without degrading like other batteries.

In fact, ESS says its iron-flow batteries can stand up to more than 20 years of daily use without losing a notable level of performance.

Flow batteries and the future of energy storage

With their longevity, large capacity, and ability to store energy for long periods of time, flow batteries appear to be a prime candidate for playing a starring role in the future of energy storage. They will, however, still need a backup cast.

Storing energy from the grid is likely to require a combination of different storage technologies. Some may be more feasible for short-term storage, some for longer-term storage, and still, others may fill in the gaps when additional resources are needed to fill customer needs.

As flow storage technology and costs continue to improve, flow batteries are likely to take on larger and larger roles in renewable energy storage across the globe.

While reading through all the details on flow system technology is good, getting a quick summary of the top flow battery questions may be even better. Here they come.

What is the problem with flow batteries?

The biggest problem with flow batteries is the cost. They’re currently nearly double the cost of lithium-ion batteries to build. Flow batteries that use iron, salt, and water do cost less than those that use the rare metal vanadium, but not all companies use the iron-flow technology.

How long do flow batteries last?

Are flow batteries better than lithium-ion?

That’s kind of like asking if classical music is better than rock ‘n’ roll. It depends on what you’re going for. When it comes to renewable energy storage, flow batteries are better than lithium-ion batteries in some regards. But not in all regards.

Flow batteries are better when it comes to:

Lithium-ion batteries are currently better when it comes to:

Note that flow batteries are not expected to replace lithium-ion batteries for renewable energy storage—or anything else. Flow systems will be used when energy needs to be stored for eight hours or more.

With one to four hours of storage, lithium-ion batteries will remain the main type of battery for laptops, electric cars, and other applications with shorter runs.