There are some innovative smog eating technology solutions being used today to reduce air pollution in cities around the world. The future is now, people. Let’s dive in. 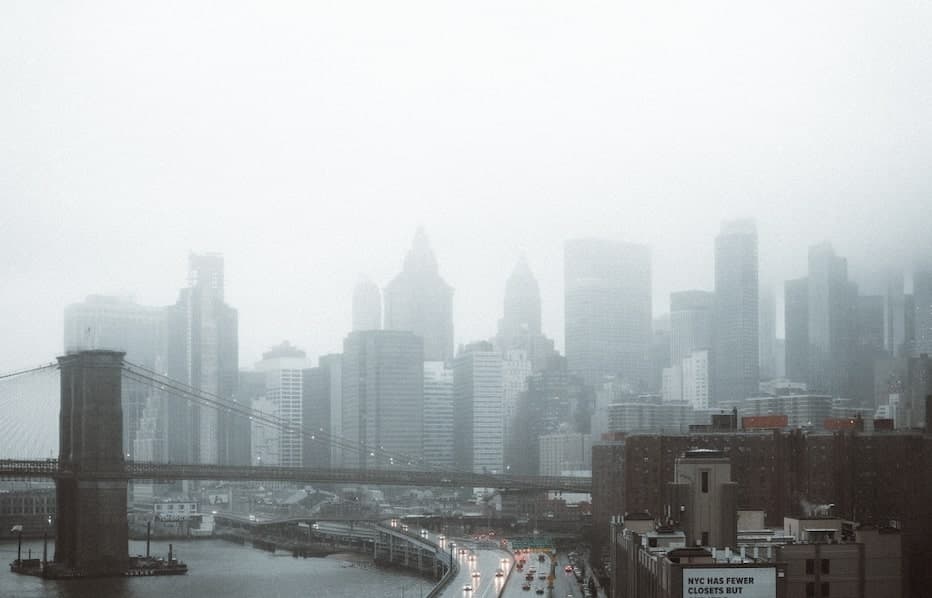 Used first in the early 1900s, "smog" is a term that was coined as a cross of smoke and fog. Smoke used to be a by-product of burning coal that powered industries such as textiles and thermal power plants. As a result, smog was one of the most visible features of industrialization in the early 20th century. However, smog blanketing of fast-urbanizing centers, like London or Hong Kong, caused severe reduction in visibility, affected residents' respiratory health, and hampered mobility.

Today, most of the smog in our cities is photochemical smog, which occurs when sunlight reacts with nitrogen oxides and volatile organic compounds (VOC) in the atmosphere. For example, vehicle fumes, coal plants and factories emit nitrogen oxides while paints, gasoline and various cleaning solvents release VOCs. In the presence of sunlight, these form smog, which is chemically ground-level ozone (O3).

O3 is beneficial high up in the atmosphere but it can cause severe problems at the ground level. It can cause eye irritations, various respiratory illnesses like asthma, or even severe lung damage in humans. It also has implications for the environment as it damages local flora and fauna. In the context of big city life, smog also affects traffic.

As our cities expand and populations rise, there’s a pressing need to deal with smog. Research initiatives, innovative solutions, and substantial funding are required to tackle this urban problem.

The good news is, there are already some innovative smog eating technology solutions being used to reduce air pollution in cities around the world. The future is now, people. Let’s dive in.

Understanding the aforementioned chemical make-up of smog that’s menacing for our cities, the best way to get rid it is to attack it chemically and break its constituents down. Smog-eating technology does exactly that! It enables us to break smog down chemically by using unique materials in our roads and buildings—omnipresent features of our urban environment.

What does smog do to humans?

Inhaling smog can put humans at a higher risk of severe heart and lung diseases. In addition, smog irritates our airways and can cause allergies leading to asthma. At the very least, on a high-ozone alert day, city dwellers could suffer from serious coughing, wheezing, and burning of throat and eyes. Smog is especially harmful among vulnerable, high-risk groups like children, the elderly, and the diseased. In fact, according to WHO, one out of nine deaths across the world can be attributed to air pollution.

Therefore, we are faced with an urgent need to clamp down on smog and get rid of it from our congested cities and towns. Let’s look at some of the most fascinating and promising technologies that can enable us to tackle this challenge and make our city air safer, healthier, and clearer!

This is a highly effective smog-eating technology as city roads possibly offer the largest surface area to smog and are the most consistent features of the urban landscape. Smog-eating roads use titanium dioxide, which creates hydroxyl radicals and superoxides when exposed to UV light (also known as photocatalytic pavements). As these substances oxidize, they decompose the surrounding nitrogen oxides, in effect “eating” the smog around them. The Netherlands pioneered smog-eating pavement in 2013 with U.S. cities such as Chicago and Orlando also having since tested it out. This is an extensive macro-level application of smog-eating technology and the same can be used in buildings at the micro-level.

Titanium dioxide (TiO2) can be on many construction materials like tiles, concrete and paints. The compound has been used in many buildings worldwide to rid the air of smog. In 2015, the Palazzo Italia, constructed with cement mixed with TiO2, was showcased in Milan. Likewise, Mexico City has a famous hospital building called the Torre de Especialidades that has a 100-yard-long "depolluting facade" covered with the same smog-eating tiles. Similarly, Alcoa, an aluminum firm, has already hit the market with its TiO2 coated aluminum panels.

The Berkeley Lab has designed photocatalytic granules for roof shingles that can decompose smog in the presence of sunlight. When reacting with nitrogen oxides, these granules are converted into non-volatile chemicals that are eventually washed away with rain. Smog-eating roof shingles are an up-and-coming solution as around 80% of US homes use shingles, offering vast surface area to smog-filled air.

The Smog Free Tower: A vacuum cleaner for city air

Several urban innovations were launched under the smog-free project by Daan Roosegarde; one such is the Smog Free Tower. The project launched in highly urbanized and industrialized nations such as China, South Korea, the Netherlands, Poland and Mexico. The Smog Free Tower is a 23-foot-tall smog vacuum cleaner that uses ionization technology to produce smog-free air in public spaces. It cleans around 30,000 cubic meters of air every hour and runs on green electricity. It is a great local solution for public areas such as parks and playgrounds.

Much of urban smog is the result of vehicular traffic on roads. Electric vehicles are a game-changer for city pollution. The most environmentally friendly thing about electric cars is that they don’t have tailpipes because they’re powered by lithium-ion rechargeable batteries, instead of combustion engines. That means that they don’t directly emit carbon dioxide into the atmosphere—or any other gases or fumes, for that matter, like nitrogen oxide, carbon monoxide and formaldehyde.

The further advancement of driverless, autonomous or self-driven cars should also be a big win in our fight against city smog for three main reasons:

Coal-based power plants are one of the most significant sources of air pollution and smog generation. As we shift our energy reliance to renewables like solar energy, there will be a visible cut down on pollution levels. This will help clear up the skies of our cities as smog levels will drop substantially.

It's clear that innovative technology is the best way to combat smog. As traffic in our cities gets denser, technologies across the board must advance and be in line with our world’s sustainability and anti-pollution goals. These advancements need not directly address the smog or pollution problem. But, as in the case of solar energy, if these advancements take our reliance on fossils away, we will automatically cut down on our pollution levels and have cleaner skies in our cities.