Solar Energy Explained: What is Solar Power & Its Role in a Renewable Energy Future?

Solar energy is the cheapest, fastest-growing renewable and sustainable power source in the world. Learn how solar works, the types of solar technologies and solar systems, and how you can personally enjoy the planet-friendly, cost-saving benefits of solar. 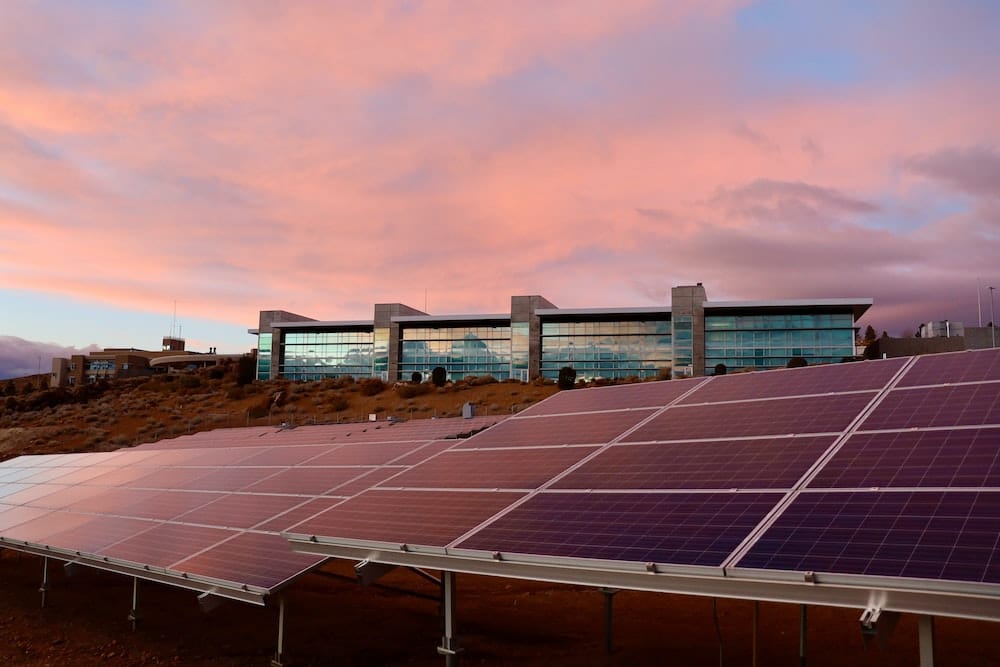 The U.S. Department of Energy (DOE) published a Solar Futures Study in 2021 that concluded the United States could generate as much as 40% of its electricity from solar power by 2035 and increase production to 45% by 2050. The DOE study emphasized that meeting these goals will require supportive government policies, aggressive investments in technology and infrastructure, and support from the public.

The amount of sunlight that strikes the earth's surface in an hour and a half is enough to handle the entire world's energy consumption for a full year. — U.S. Department of Energy

Solar energy refers to transforming the sun’s light and heat to a usable source of power. Today, most people think of generating electricity through solar panels when they hear about solar power. After all, according to the DOE, the energy from the sun that hits Earth in less than two hours could satisfy global energy needs for a year. Today, various modern technologies concentrate the sun's electromagnetic radiation into electric or thermal power.

Today, generating electricity from the sun gets the most attention. Of course, people have understood, used, and even revered the sun's power throughout history, even before they knew how to use electricity. Some historical examples include:

Either of these technologies offers similar benefits, like generating power without pollution or emissions and eliminating reliance upon harmful, limited resources like fossil fuels. According to Ohio University, CSP costs more to deploy initially, so large organizations generally consider it for utility-scale power plants. In contrast, homeowners and small businesses find PV more affordable to install.

Because PV costs less to build, this form of solar power has gained popularity in recent years. However, CSP experts defend the technology because it can store energy more efficiently, which means it can help meet demands when PV solar technology cannot produce.

Active solar systems use devices to convert solar radiation to another form of energy, like electricity or heat. For instance, solar space heating systems use heat-transfer mediums, like liquid or air to capture thermal energy from the sun. In turn, the system will distribute this warmth to rooms in a building with pumps or fans. These systems are relatively expensive, but the Environmental Energy and Study Institute says they can pay for themselves within a few years.

In contrast, passive solar systems describe a structure with placements, materials, or facilities that optimize light or heat from the sun without changing it.

Some simple examples of passive energy systems include:

Is solar energy renewable or nonrenewable?

As the song says, the sun will come up tomorrow! Not only does solar energy offer a renewable source of power, but it's also abundant. Even though climates vary, every region of the world receives sunlight. As long as the sun shines, consider solar energy renewable.

Renewable vs. sustainable energy: How solar power fits in

Even energy industry experts may use the terms sustainable and renewable interchangeably. The two terms don't mean precisely the same thing. To understand the difference between sustainability and renewability, compare brief definitions:

For example, you might call biofuel renewable because it comes from plants. On the other hand, producing energy with biofuel generates methane emissions, which can still impact the environment. Thus, it's not strictly sustainable. Solar energy, along with wind and hydropower, fit both the definitions of renewable and sustainable.

Coal, oil, and other traditional fuel sources will eventually run out, and using these fuels to produce power generates emissions that cause pollution and climate change. Everybody needs to factor in the health and environmental costs of these energy sources when calculating the price of using them.

In contrast to fossil fuels, solar energy relies on a renewable and sustainable resource that will last as long as the sun does. Converting solar radiation to usable power also does not generate pollution or climate-changing emissions. Even better, solar power systems keep getting more accessible with utility-scale plants, community solar programs, lower prices, and better technology.

Still, every form of energy generation includes its positives and negatives. Some examples of potential drawbacks of solar power include:

Solar proponents have good reasons to optimistically predict a continued increase in the use of solar power. This list highlights a few examples:

Lower costs will attract more investment, which helps promote competition and technological advancement. Also, solar power keeps getting more accessible from more than just an economic standpoint. In the past, only property owners could take advantage of solar power.

According to the EIA, community solar programs offer the benefits of solar power to people who cannot install solar power systems because they rent, don't have a property with the right conditions or rooftop size, or face financial obstacles. For instance, these programs allow people in the community to buy or lease a portion of the solar panels and receive energy credits for their share.

A 100% renewable energy future will take support from governments, businesses, and the public. For many individuals, solar power offers a great place to get started—and can even help you save money on the long-term. Here's how:

Solar energy can drastically reduce or even eliminate electric bills, and solar installations improve home values. Attractive financing and government incentives can make installing solar power systems at home even more appealing. But not everyone can put solar on their rooftop—whether due to an ineligible roof, lack of sun exposure, you're renting, or you simply don't want to spend the upfront cost of installation (which can be upwards of $15,000 or more).

Community solar lets you and other community members "subscribe" to a local solar farm and earn credits based on how much energy it produces. Your subscription helps support the operation of that farm so it can generate clean solar energy for the overall grid (lessening the utility's reliance on harmful fossil fuels).

You don't directly receive electricity into your apartment or home or business from the solar farm—you're just helping it pump clean power to the grid. But thanks to government incentives, you'll get a discount on your own electricity bills. Essentially, you're being rewarded by your state with savings because you're enabling solar generation and development.

There are no upfront costs to join a community solar program, no panel installation required, and no ongoing maintenance—it's a no brainer!

Use Perch to see if there's community solar in your area >

Switch to a cleaner, solar-powered electricity supply at home

If you can't install a solar array or don't want to make the commitment, and there isn't an eligible community soalr program in your area—you may still be able to benefit from the eco-savings of solar power. If you live in a deregulated energy state, you can shop around and choose who provides your electricity. Switching your home's electricity plan away from your basic utility service (often a "mixed" plan backed by part fossil fuels, part renewables)—and into a plan that is backed by 100% renewable sources including solar—can significantly lower your daily carbon footprint. It's a great alternative to solar installation and is available to you whether you own or rent. Shopping the supplier marketplace and analyzing contracts can be a bit confusing and time consuming. So let Perch do it for you. With Perch, we'll handle all the heavy lifting of switching for you. And the best part is we'll always find you the most affordable clean electricity plan compared to similar options in the market. So going green doesn't have to be expensive.

Tell your local officials and legislators the importance of a renewable energy future to help curb climate change, preserve the environment, reduce costs, and improve energy security in your own community, city, or state.