Vertical Farming Explained: Is Indoor Agriculture the Key to Feeding the World?

Vertical farms are large indoor spaces with plants stacked up to the ceiling. They can grow a lot more food in the same amount of space as a conventional farm, but at a higher cost. And while they use less water and chemicals than traditional farms, they’re not always greener overall. 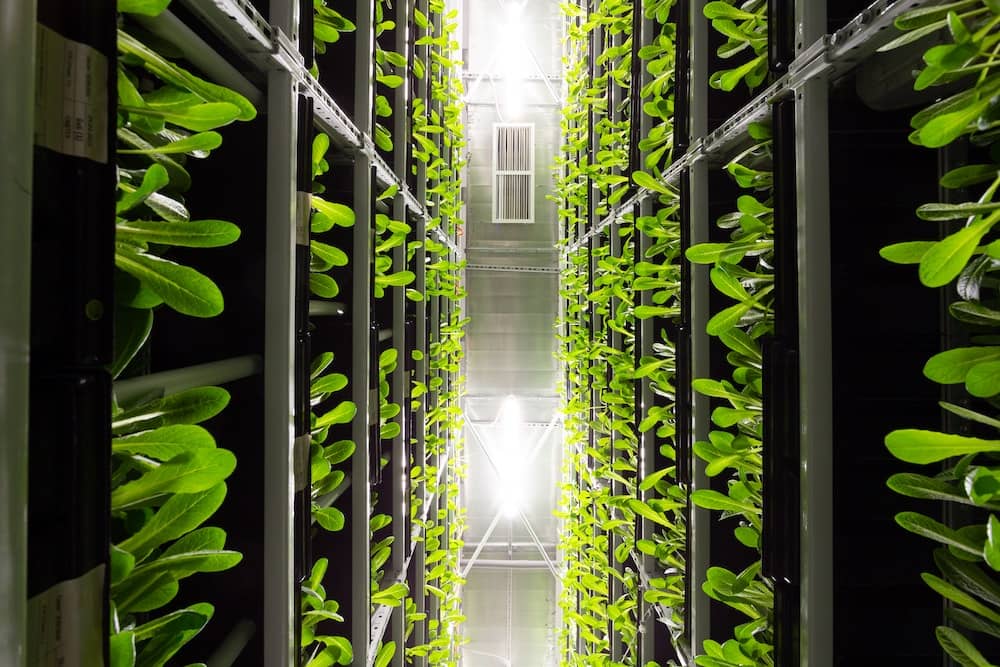 One of the biggest problems facing humanity is how to feed a growing population in a warming world.

The UN says the world population will probably hit 8 billion in 2022 and could reach 9.7 billion by 2050. That’s a lot of mouths to feed, and our means of growing food is declining. From 1975 through 2015, the world lost nearly one-third of its farmland. Development is encroaching on arable land, while erosion, climate change, and soil degradation are making the remaining cropland less productive.

To meet the world’s ever-growing need for food, we need to do more with less land. And one part of the solution could be to grow up, not out.

What is vertical farming?

When you picture a farm, you probably see rows of grain and vegetables stretching out across acres of land. The sun overhead nourishes the plants, and the rain waters them. This is what farms have looked like for thousands of years.

Now take that picture and turn it on its side, with rows of plants growing up. Heads of lettuce and other greens are lined up on stacked shelves. Tomato and cucumber vines curl up strings suspended from the ceiling.

That’s right, the ceiling. This farm isn’t outdoors under the sun but inside a building. In this setting, levels of light, heat, and moisture can all be finely controlled to maximize plant growth. The weather and the seasons don’t matter. With the right inputs, crops can grow all year round.

This is a vertical farm. It can grow far more produce than a traditional farm in the same amount of space. And it can be located anywhere—in the city, country, or suburbs, in any type of climate.

How is vertical farming different from traditional farming?

Vertical farming isn’t just about growing upward. It’s a fundamentally different approach to farming. In a traditional farm, a lot is left to nature, which is unpredictable. In a vertical farm, by contrast, everything is carefully controlled. That’s why another name for vertical farming is Controlled Environment Agriculture or CEA.

Differences between traditional and vertical farms include:

A vertical farm has very different needs from a traditional farm. It doesn’t require acres of land, heavy equipment, or chemicals to deter pests and weeds. It relies much more on high-tech, automated systems.

Most vertical farms use a technique called hydroponic farming. It allows plant roots to dangle down through mesh planters into nutrient-enriched water. This method requires reservoirs for the water and systems for adding the right mix of nutrients. It also needs air pumps and air stones (porous rocks that break up air bubbles) to add oxygen to the water. Some hydroponic farms also use pipes and water pumps to circulate the water.

CEA also requires artificial lighting. Most vertical farms use energy-efficient LED lights that can be precisely controlled for light level and even color. In addition, there are sensor-controlled systems for controlling temperature and humidity. And, of course, a vertical farm needs a structure to house all this equipment and electricity to power it.

CEA has many advantages over traditional farming methods. Vertical farms can offer:

A vertical farm, with its many tiers of plants, can produce far more food per unit of space than a conventional farm. A 2011 Cornell paper estimates that yields can be anywhere from 4 to 30 times as much per acre. And some vertical farms, such as Plenty in San Francisco, claim still higher yields.

Because seasons don’t matter indoors, vertical farms can be productive year-round. They can grow summer produce like strawberries, basil, and tomatoes in the dead of winter. This eliminates the need to ship these products from halfway around the world, reducing their carbon footprint. It can also provide consumers with fresher, tastier, more nutrient-dense food.

CEA uses far less water than conventional farming. Cornell estimates that vertical farming cuts water use by 70% to 95%. This could be a huge boon in desert regions like the Middle East. And it could be increasingly useful in the American West, which is growing drier due to climate change.

An indoor farm protects crops from pests, weeds, pollution, diseases, and the increasingly harsh weather of a changing climate. It’s much easier to grow crops organically indoors, as there’s no need for pesticides or herbicides. This protects workers by reducing their exposure to these harmful chemicals. And CEA protects consumers from food-borne pathogens like E. coli, which sickens and even kills Americans every year.

Because vertical farms don’t require a lot of land, it’s easy to put one in the middle of a city. That’s important because as the world population grows, it’s also urbanizing. By 2050, over two-thirds of the world’s people could live in cities. Vertical farming could supply those people with food where they live, reducing the need for carbon-intensive transportation. And it will do far less damage to wildlife habitats than a vast expansion of conventional farming.

Despite its many benefits, vertical farming isn’t a silver-bullet solution to world hunger. It has many downsides, including:

A vertical farm, with all its complex systems, is far more costly to start than a conventional farm. A vertical farm that fills a single shipping container can cost $82,000 to $85,000—as much as 10 acres of U.S. farmland. Large farms can require millions or even tens of millions of dollars in startup capital.

In addition to high startup costs, vertical farms have high ongoing costs for labor. Not only do they require more skilled labor, they’re also more likely to be in cities, where wages are higher. Some systems can be automated, as they currently are in so-called smart greenhouses. However, they still need a human to keep an eye on them. Also, workers are required to pollinate the plants by hand.

Another huge cost for vertical farms is energy bills. They’re entirely dependent on artificial lighting, as well as HVAC systems to control temperature and humidity. A 30,000-square-foot farm in New York City would spend over $335,000 per year on lighting, HVAC, and other power uses.

Besides being costly, all this energy use produces a lot of greenhouse gas emissions. According to Boston’s FreshBox Farms, its vertically-grown greens have the same carbon footprint as field-grown greens. However, switching over to renewable energy greatly reduces the climate impact of vertical growing. A 2018 comparison of farming methods found CEA is the least climate-friendly method when it relies on fossil fuels, but the greenest of all when powered by renewable energy.

But there’s one problem renewables can’t help with: power outages. A vertical farm’s finely tuned systems for controlling light, temperature, and humidity all are dependent on electricity. That means just one day’s power loss could damage or destroy a whole crop.

CEA is still a very new way to farm. Growers can’t draw on centuries of accumulated knowledge about maximizing crop yields as they can with conventional farming. To help with this, the USDA’s Agricultural Research Service launched an intensive study of CEA methods in 2018. It aims to improve plant breeding, environmental control, nutrient solutions, disease management, food safety, and quality.

As of 2019, vertical farming was a $1.3 billion industry in the U.S. The country had more than 2,000 vertical farms growing herbs, microgreens, fruits, vegetables, flowers, and other crops. And the industry continues to grow at a rate of over 11% per year.

However, vertical farming is still just a small sliver of U.S. agriculture as a whole. In 2020, the entire U.S. market for fruits and vegetables was over $62 billion and growing at 5% per year. So, while vertical farming is growing fast compared to other types of agriculture, it’s nowhere close to taking over.

The biggest factor holding back CEA is cost. Between the high startup costs and ongoing costs for labor and electricity, it costs about $27 per square foot to run a vertical farm. By contrast, a smart greenhouse that relies on natural sunlight can operate for about one-third of that cost.

This, in turn, makes CEA produce much more expensive. In 2018, Eater compared costs for salad greens and kale from conventional farms and vertical farms. The CEA greens cost anywhere from 33% to 966% more. If prices remain this high, vertical farms are unlikely to be more than a niche market.

Is vertical farming a good idea?

It can be, but not in all locations. CEA makes most sense in areas where its biggest costs—real estate, labor, and electricity—aren’t too high. It’s also great for desert cities like Dubai, where the world’s biggest vertical farm opened in May 2022. The savings on water, a scarce resource in the region, offset the other costs.

Making money from CEA is possible, but it’s not easy. The startup costs for a vertical farm are so high that it can take 10 to 15 years to pay them off. The farms with the best chance of success have investors with deep pockets to help with startup costs. They also have clients willing to pay a premium for their produce, such as upscale urban restaurants seeking fresh herbs and greens.

Why does vertical farming typically fail?

Vertical farms can fail for many reasons. Some make the wrong choices about what to grow, ending up with produce they can’t sell. Others try to do too many things at once. They focus too much on developing better technologies rather than growing good food. Underestimating labor costs is another major pitfall. So are inefficient layouts that require workers to spend too much time moving from place to place.

Can vertical farms feed the world?

Not by themselves. Most vertical farms depend on hydroponic growing, and that’s only suitable for certain types of crops. Vertical farms are good at producing leafy greens, herbs, and small fruits like strawberries and tomatoes. These are all healthful, but they’re not substantial enough to live on. Even a plant-based diet depends heavily on more caloric plants like grains and soybeans, which vertical farms can’t grow.

However, vertical farms can still be a piece of the puzzle. They can supply much-needed produce in food deserts—urban areas with few or no fresh food sources. One scientist predicts that vertical farms could produce up to 50% of the nation’s greens and 5% of its small fruits within 10 years. Meanwhile, grains and beans that are easier to transport can continue to come from conventional farms.

The future of vertical farming

The team of CEA and conventional agriculture is better than either one alone. Together, vertical farms and traditional farms can supply both staple crops like grains and nutrient-rich fresh produce year-round. With each type of farm doing what it does best, they can create a stable, nutritious food supply for everyone.