Thermal pollution occurs when hot or cold water is dumped into a natural body of water, changing its temperature. This harms water-dwelling plants and animals and the ecosystems that support them. 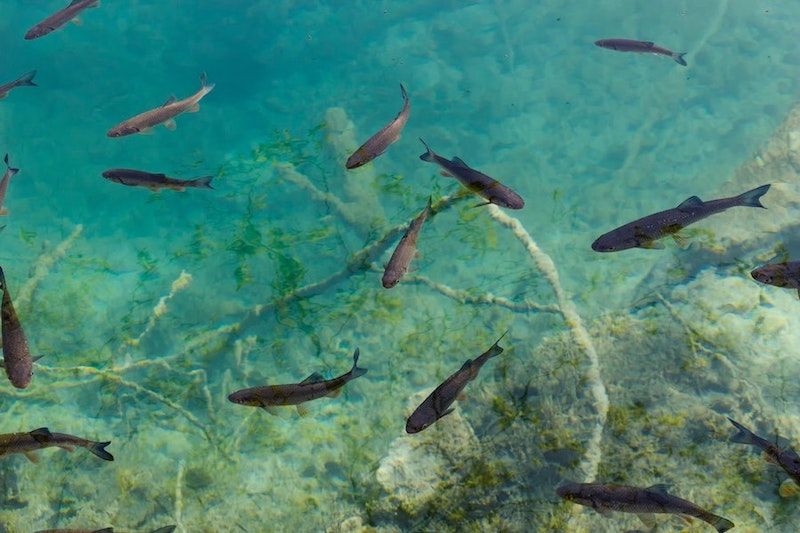 Perhaps this has happened to you: You’re taking a shower, enjoying the pleasantly warm water. Then someone flushes the toilet, and suddenly that water becomes scalding hot. You yelp in pain and jump away from the shower head until the stream cools off again.

Now imagine you’re a water-dwelling creature, like a frog or a fish. One day, a torrent of hot water suddenly pours into the river you call home. Unlike the human in the shower, you can’t jump away from this hot water. And since there’s so much of it, it takes a long time for the river to cool off.

This situation is called thermal pollution. It’s as hard on aquatic creatures as a scalding shower is on humans, and much harder to escape from. And in the long term, it does considerably more damage.

What is thermal pollution?

Thermal pollution is any sudden change in the temperature of a natural body of water. Normally rivers, lakes, and oceans maintain a fairly steady temperature. They gain heat from sunlight, warm currents, and hot springs, but they disperse this heat naturally.

However, when a large amount of hot or cold water gets dumped in, this overwhelms the natural balance. The water temperature shifts, throwing the ecosystem into disarray. Thermal pollution alters the water chemistry and harms plants and animals, causing stress, disease, and even death.

Most cases of thermal pollution involve excess heat. However, too little heat—or, to put it another way, too much cold water—can also cause problems.

The causes of thermal pollution

Both natural events and human activities can cause thermal pollution. The most common cause is discharges of wastewater used for industrial cooling. Thermal pollution can also happen when something affects a body of water’s ability to cool off naturally.

Use of water for cooling

Many industrial processes produce a lot of heat. One major example is power generation from fossil fuels, biomass, or nuclear energy. These types of power plants work by heating water to make steam, which turns a turbine to produce power. They’re often built near a natural body of water so they can convert that water to steam.

The power plants also use this water for cooling. They pull in cold water and run it over the machinery to absorb excess heat. Some of this water evaporates, but the rest gets dumped back into the body of water it came from. This heated water raises the temperature of the body of water as a whole.

Other industries also generate a lot of waste heat. These include oil refining, pulp and paper mills, steel mills, chemical plants, and desalination plants. All of these use water to cool their machinery and then dump it back into natural bodies of water. This process is called “once-through” cooling because cold water passes through the plant once and leaves as heated wastewater.

Soil erosion is the gradual wearing away of topsoil from the land. It can occur both naturally and as a result of human activities. When soil erodes near rivers and streams, it causes their beds to become wider and shallower. This exposes more area to sunlight, which heats up the water.

Deforestation is the removal of trees from an area. Humans cut down forests to harvest timber and to clear land for crops, livestock grazing, or development.

Deforestation causes thermal pollution in two ways. First, it contributes to erosion along river and stream beds. Second, it removes shade from lake shores and riverbanks. This exposes the water to more sunlight, causing it to heat up.

In the summer, city streets, buildings, and other hard surfaces get very hot. A rainstorm can help cool everything off, but where does all that excess heat go? Into the water, which then runs off into nearby streams, rivers, and sewer drains that ultimately lead to the ocean. The city gets cooler, but nearby bodies of water get hotter.

Rain in urban areas can also flood retention ponds. These are artificial ponds used to capture rainwater for flood control or other reasons. These ponds are wide and shallow, so they heat up quickly in the sun. If water spills out of them, all that hot water runs off into natural bodies of water nearby.

Some causes of thermal pollution are natural. Heat from wildfires, volcanoes, and underwater thermal vents can all cause sudden spikes in water temperature. Lightning strikes are also a source of natural heat.

However, in some cases, these natural causes also have a human element. For instance, wildfires today are more frequent and more severe due to human-caused climate change and mismanagement of forests. Climate change can also lead to cold-water thermal pollution because it causes glaciers to melt faster.

The effects of thermal pollution

Thermal pollution harms ecosystems in various ways. Besides killing or harming aquatic creatures directly, it changes their habitats in ways that make them less livable.

Disruption of fish and amphibian habitats

Many aquatic plants, insects, and amphibians are sensitive to small changes in temperature. When the water suddenly becomes warmer or colder, they suffer stress. Some of them become ill or die. Others survive, but they become less fertile or produce deformed offspring. Over time, this causes the population to drop.

The loss of these species disrupts the food chain and upsets the balance of the ecosystem. To make matters worse, the creatures that remain often eat more because the warmer water speeds up their metabolism. This throws the ecosystem still further out of balance.

Coral reefs are especially vulnerable to thermal pollution. In warm water, corals expel the algae living inside them and lose their color, turning completely white. This is called coral bleaching. Corals can survive a bleaching event, but the more often it happens, the weaker they grow.

All these problems result from too much hot water. However, cold water can be just as big a problem. Plankton, fish, and fish eggs may die if temperatures are too cold. This, too, disrupts the food chain and the balance of the ecosystem.

Warm water holds less oxygen than cold water. When water heats up, the molecules move around faster, allowing more oxygen to escape. Thus, any sudden infusion of heat in a body of water reduces its levels of dissolved oxygen. Oxygen-breathing creatures unable to leave the area can literally suffocate.

Not all species suffer when water temperature rises. Algae, especially, blue-green algae, thrive in warmer water. Organic matter decomposes faster in warm water, filling it with nutrients that feed the algae. And because warm water doesn’t mix as readily, there are fewer currents to stop algae clumps from forming.

Unfortunately, too much of this type of algae is bad for an ecosystem. It absorbs oxygen, making dissolved oxygen levels even lower. It can choke out other animals and plants. And it absorbs sunlight, making the water even warmer, so the problem grows worse over time. Eventually, it can create “dead zones” where oxygen levels are too low for aquatic creatures to survive.

Increased toxins in the water

Thermal pollution often comes with a side dose of other pollution. Runoff from urban areas and farmland may contain harmful chemicals like sewage and pesticides. Industrial cooling water often contains fuel oil, solvents, heavy metals. And cooling water from nuclear plants can be faintly radioactive.

All these pollutants can poison plants and animals or cause them to become sterile. And because sewage and agricultural waste are often high in nutrients, they can make algal blooms worse.

When water temperatures change, fish and amphibians often migrate away, seeking water that’s the right temperature for them. This leaves less food for birds, which also leave the area.

At the same time, other creatures are dying off or reproducing less in the new water temperature. The few creatures that can thrive at the new temperature breed more and gradually take over the area. Over time, this can greatly reduce a region’s biodiversity—its overall mix of plant and animal life.

However, power plants aren’t the only major cause of thermal pollution. For instance, in Middle Eastern countries such as Israel, desalination plants are a big contributor. A 2020 study looked at desalination plants in Israel that dump cooling water into the ocean. It found that these discharges from these plants significantly reduced the number and diversity of certain creatures that live on the seafloor.

Can thermal pollution be resolved?

The main source of thermal pollution is cooling water. Thus, the best way to address the problem is to get rid of once-through cooling systems. There are three ways to do this. Either don’t use water for cooling, cool the water before dumping it, or don’t dump it at all.

It’s possible to cool machinery with air instead of water. A dry cooling system uses only a small amount of water, which is collected and reused. The rest of the cooling comes from a flow of moving air. This kind of system is most common in dry climates since it greatly reduces water use. However, dry cooling systems are generally less effective and more costly than water cooling. Also, the small amount of water they do discharge contains high levels of pollutants.

There are several ways to cool wastewater before releasing it into the environment. One method is cooling ponds: shallow reservoirs with a large surface area. This cheap and simple system allows water to release heat naturally to the atmosphere.

Cooling towers can remove heat even more efficiently. They maximize water’s exposure to the air by spraying jets of water down through a tower. As the water passes through the air, it loses heat and some of it evaporates. Any remaining cooled water collects at the bottom of the tower, where it can be discarded or reused.

A final option is to recycle wastewater. It can be cooled in a cooling tower or an artificial lake, then reused for cooling again and again.

Better still, the heat in the water can also be put it to good use. For instance, heated water can circulate through pipes to provide heat within the plant where it was created. It can also be pumped into nearby homes for the same purpose. Farms can use the heated water to warm the soil or heat greenhouses, livestock shelters, and fishponds. In cold climates, these practices turn heat from a pollutant to a useful product.

To solve the problem of thermal pollution, industries need to change their practices. The question is how to persuade them to do it. In general, industries do things the way they do because it maximizes their profit. To get them to change, we need to make wastewater dumping less profitable.

One way to do this is to ban wastewater dumping. Companies that continued to do it would then face steep fines. Government can also address the problem with carrots rather than sticks. They can offer tax breaks and other incentives to companies that eliminate once-through cooling systems.

Individuals can also be part of the solution. Since fossil fuel plants are a major source of thermal pollution, switching to clean energy can help reduce the problem. Wind and solar power plants don’t produce heated wastewater, and they don’t emit greenhouse gases, either. Thus, making the switch can also help limit climate change and the thermal pollution that comes with it.