Some forms of green energy no longer cost more to produce than fossil fuels—or for consumers to buy and benefit from. Renewable energy is getting cheaper every year thanks to aggressive government policies, new technology, broader accessibility, increased consumer education, and volatile coal and gas markets. While a totally clean energy future will have upfront costs, the long-term positive economic, environmental, and societal benefits are staggering. 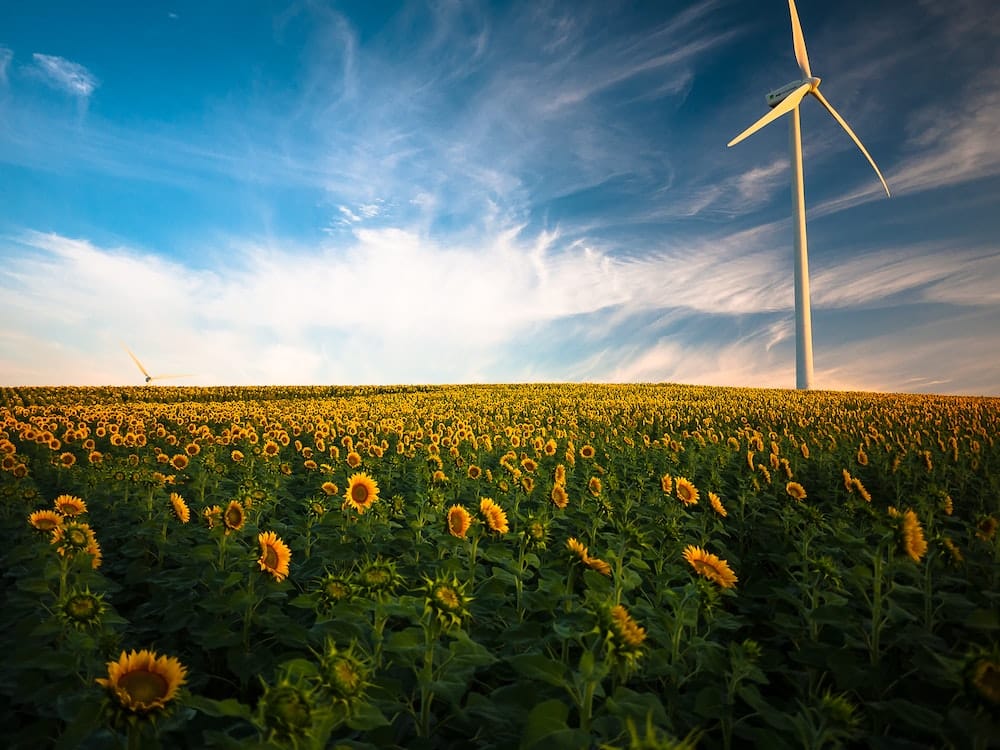 Renewables are officially the cheapest form of power in the world says, a 2021 report from the International Renewable Energy Agency (IRENA).

If it feels like renewables are in the news more frequently today than, say, five years ago, it’s because they are. The climate crisis has put fossil fuels—and their harmful impact on the environment—in the spotlight further solidifying renewable energy as a necessary step to help cool down our planet.

Whether by choice or by sheer overwhelming scientific evidence, countries worldwide are responding. Global leaders and governments everywhere are implementing the most aggressive carbon-reducing and carbon neutrality policies in history—pressuring energy sectors and power grids to lower reliance on fossil fuels and make cleaner electricity sources more accessible and affordable.

These policies and climate goals have led to innovation in renewable energy development, technology, storage, and deployment, and the cost of building renewable projects continues to decrease. With more consumers and businesses switching to renewable power every day, a clean energy future appears inevitable.

But understanding the true “cost” of energy requires taking into account many factors.

What is the cost of renewable energy?

The best way to evaluate the cost of renewable energy is to compare it to the relative cost of fossil fuels. But because they are such different energy sources with drastically different processes to build, maintain, and function, this is not an easy thing to do.

The best way to evaluate cost is to look at the Levelized Cost of Energy (LCOE). It’s a mathematical approach that’s widely used by energy experts to calculate whether a new energy-generating asset (think: power plant, solar farm, wind turbine) will create enough revenue to offset the costs of building and maintaining that asset. Simply put: Is the project a good financial investment?

LCOE is an important metric when talking about the cost of renewable energy compared to alternative energy sources. The energy source with the lowest LCOE is the one that governments, investors, and businesses will put their money into growing.

What is the LCOE of solar and wind in comparison to coal?

This means that it’s now actually cheaper to build and maintain a brand new solar or wind project, throughout its lifetime, than to simply maintain an already existing coal power plant. Or as Energy Innovation CEO Hal Harvey so elegantly put it: “Saving the earth is now cheaper than ruining it.”

This is a crucial turning point, as it is now financially beneficial for countries to phase out coal plants and build new renewable energy equivalents in their place. Phasing out coal is considered to be the single most important step to limit global warming to 1.5°C—the ultimate goal of Paris Climate Agreement.

Some renewable energy sources are indeed now cheaper than non-renewable energy. This is because, at least in America, solar and wind in particular are predicted to dominate much of the new energy generation while coal and natural gas (non-renewables) will see upwards of 85% of plant closures—just in 2020 alone.

Solar and wind’s LCOE has officially undercut coal, which will lead to an acceleration of new renewable production projects and a phasing out existing coal plants—both of which further reduce the cost of renewable energy.

However, it’s important to recognize that not every renewable source is cheaper than every fossil fuel source right now. Solar and wind are no doubt making the biggest strides, but there is more work to be done to reduce the costs of other promising renewable resources like hydropower and geothermal energy. Those two in particular have a slightly more complex LCOE calculation given the nature of building the plants and equipment and the process and producing energy. That being said, the outlook is positively bright.

Why is renewable energy cheaper?

Experts at IRENA have analyzed “the virtuous cycle of falling costs.” Other scholars call this the “learning curve.” Every time capacity for renewables doubles, the price drops by half. The learning curve figures in a shift to mass production, better technology, and increased funding for research—all things that increase capacity of renewable energy generation. These forces tango with increased market demand shouting for more solar and wind, which drives prices down.

Fossil fuels went through the learning curve around 100 years ago. Now, coal plants are about as good as they can get and fuel makes up a higher portion of the price than technology does. As fossil fuels become scarcer, they become more expensive to get, leading to rising prices and volatility. For instance, natural gas’ price dropped because of new technology (fracking) to get out hard-to-reach gas. But with the worldwide recognition of fossil fuels’ harmful impact, all of the funding and tech advancements are going toward renewables. Fossil fuels will only continue to get scarcer, and usage will phase out, leading to even higher price volatility as renewables become more stable due to increased capacity.

One of the main reasons for affordability of both wind and solar energy are government subsidies. The U.S. changed from subsidizing mostly nuclear and coal energy to subsidizing renewables. Around the world, governments offer both consumer and business subsidies for using renewable energy that is sustainably sourced.

In the U.S., tax incentives are applied to nearly all energy sources. For fossil fuels, these incentives act at the industrial level and often include removing environmental rules that others have to follow—not ideal to curb global warming. But renewables now also have industrial incentives pushing corporations and countries to invest in them more heavily. For example, the Production Tax Credit gives new wind, geothermal, and closed-loop biomass plants $25 per megawatt hour (MWh) of generation. Other eligible technologies get $13/MWh.

The price the customer pays for equipment is important, too. Solar projects get a 26% Investment Tax Credit (as of 2021), which works like a refund of part of the cost of buying commercial or residential solar.

The U.S. Department of Energy (DOE) recently announced that they were working to drop solar costs 60% by 2035. The plan is to have solar cost 2 cents per kWh (down from 4.6 cents per kWh today). They are placing around $128 million of funding into a set of research projects to advance solar technology and bring down the price. In particular, the funding will support advancing two materials used to make solar cells: perovskites and cadmium telluride (CdTe). Optimism exists that these materials can make solar panels more efficient at converting sunlight into electricity.

If clean energy is so cheap, why isn’t it more popular?

One simple reason is that so many fossil fuel plants were built, and so many industries have been reliant on it, that it just takes a long time to enact change. Until recent years, there hasn’t been strong incentive to shut down plants. That has already changed as solar and wind LCOE has undercut coal. But taking old coal and oil plants offline is just one part of the battle.

Following IRENA’s learning curve, continued production of renewables will inevitably drive the costs down. We have seen this massively with solar photovoltaic (fancy talk for the traditional solar panels you see on rooftops of in large open fields)—and can expect the trend to follow across all renewable sources in coming years and decades.

One solution to the upfront cost issue is community solar, which is growing rapidly across the U.S.A. Here's how community solar works: Renters, homeowners, businesses, institutions, government buildings and really any energy user can save money on their own electricity bills while supporting clean energy. By subscribing to a local solar farm in your area and supporting the operations of that farm, you’re helping it put more clean energy onto the overall grid. As a reward, your local government will discount your own electricity bill in the form of credits from the utility company. You’re actually guaranteed to save annually on your energy bills! And you can feel good that you’re contributing to clean, solar power generation for your community.

Community solar is the planet-friendly, cost-saving solution for those who can’t install solar panels on their roof.

Perch can help you find a solar farm in your area >

One reason for lack of consumer education isn’t necessarily consumers’ fault. Technology has been changing so quickly that education and advertising haven’t caught up. If you’re thinking about the cost of putting solar panels on your house, it’s likely your numbers are outdated—possibly from years ago when solar cost more.

Both public entities and private businesses have to step up their efforts to get more updated information out there on both the costs and environmental benefits of renewables.

Ways to get the word out

Renewable energy has a bright future

A 100% renewable energy future is not out of the realm of possibility. In fact, many experts argue it’s more than doable. It’ll take a collective effort, but we’ve already made significant strides in the last decade alone.

One next challenge facing renewable energy is dealing with the intermittency problem. As in, solar and wind aren’t producing energy 24/7, but are doing so intermittently—only when the sun is shining or the wind is blowing. But advancements in energy storage and battery technology is already helping solve this.

Another challenge is the large amount of land use these installations take up. However, solar fits in well where people live. Rooftops, driveways, windows and more are all potential solar generators if we have the right kind of panel technology. Additionally, dual-use solar and agriculture combined systems are gaining steam where traditional farmers and agricultural landowners and operators can install solar projects directly onto their land in a way that does not disrupt the local habitat or their crop production.

As renewable energy prices fall, more corporations are set to meet their renewable energy goals. Now that the LCOE lines of solar and wind have undercut coal, we’ll see even more action from the government plus the commercial and residential sectors—who can often enact change at a faster pace than individuals given their massive scale. If they didn't love the benefits of renewable energy before, they have the price to love it now.