The Ultimate Guide to Renewable Energy in New York

New York state is a leader in clean energy. As of 2020, its electricity was some of the greenest in the country. By 2050, the state aspires to produce all its electricity from carbon-free sources. 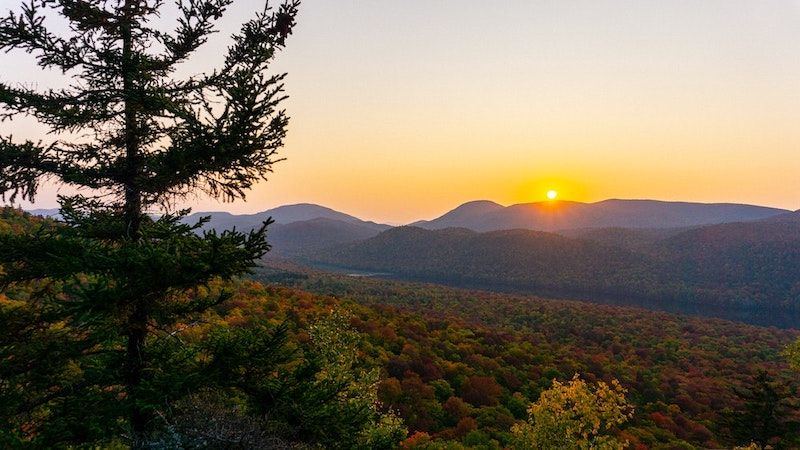 The state of New York is known for lots of things. It’s home to Broadway, Wall Street, the Adirondack Mountains, and Niagara Falls. It’s a haven for lovers of art, baseball, and thin-crust pizza. But there’s one more thing the Empire State deserves to be recognized for: its clean energy. New York state is a leader in renewable energy, with over one-quarter of its electricity coming from renewable sources. And it’s getting cleaner all the time.

The history of renewable energy in New York State

Compared to the rest of the nation, New York got a big head start on developing renewable energy sources. Back in 1975, amid the 1970s oil crisis, it founded the New York State Energy Research and Development Authority (NYSERDA). This public benefit corporation’s goal was to seek renewable alternatives to oil use.

Meanwhile, the state’s official Energy Office did policy analysis and tests of energy efficiency. When the Energy Office closed in 1995, NYSERDA took over these functions. Today, its programs cover all things related to energy efficiency and renewable energy sources. Its goals are to boost New York’s economy, lower its greenhouse gas emissions, and help consumers reduce their energy bills. A big part of this is attracting investment from the private sector for clean energy projects. The New York Green Bank—a state-sponsored division of NYSERDA—was founded in 2015 for this specific purpose.

In 2014, New York launched its official energy policy, Reforming the Energy Vision (REV). A year later came the State Energy Plan, which serves as a roadmap to achieve REV’s energy goals. These included:

New York has joined forces with other states to promote renewable energy, as well. It’s one of 11 states in the Regional Greenhouse Gas Initiative, a “cap and invest” program. Within this alliance, large fossil fuel plants (over 25 megawatts) must get allowances for every ton of CO2 they produce. They can buy these allowances, trade them with other plants, or earn them by offsetting their emissions. The money from allowance sales goes toward programs to promote clean energy and fight climate change. New York is also part of a 24-state coalition called the US Climate Alliance. Its members pledged to uphold the Paris Climate Accord when the U.S. temporarily withdrew from it during the Trump Administration.

NY is pursuing its energy goals on several levels—or, as it calls them, tiers. Its Clean Energy Standard (CES), set by NYSERDA, establishes a multi-tiered system for renewable power generation and development.

How residents of New York can take advantage of renewable energy

The Empire State offers its residents several ways to run their homes and businesses on renewable power. These include:

The NY-Sun program gives New York residents a range of incentives to install solar panels. For homeowners, there are several low-interest loan options to cover the up-front cost. These loans are available to low-income residents and others who can’t qualify for a traditional loan. A similar array of financing options is available for businesses.

On top of that, state residents can receive tax credits for going solar. The state offers a tax credit of up to 25% on solar systems installed at your residence. It also provides a property tax exemption for any additional value a solar installation adds to a home. And residents can also qualify for federal renewable energy tax credits.

New York residents who can’t install their own solar panels can choose to sign up for community solar instead. Rather than put solar panels on their own property, they sign up for a share in a nearby solar farm. Then, on each month’s power bill, they get credit for a share of the renewable energy that solar farm produces. Community solar offers renters and condo owners who don’t own their roofs a way to benefit from solar power. Community solar subscriptions are available for businesses as well.

New York is also one of several states with a deregulated market for electricity. That means residents don’t have to purchase their power from the local utility. Instead, they can switch to a new power provider that produces its electricity from clean energy. Green power is often no more expensive than the utility’s, and sometimes it can even be cheaper.

Solar power isn’t the only renewable energy option for New York residents. If you have at least an acre of land, you can install a small wind turbine on your property. This is a good option for farmers, since wind turbines don’t take up too much of the available planting space. To benefit from a wind turbine, you need an average annual wind speed of at least 10 miles per hour. You also need to get approval from a local building inspector for the installation.

In 2004, New York established its first Renewable Portfolio Standard (RPS). Fifteen years later, it updated this standard under the New York State Climate Leadership and Community Protection Act (CLCPA). The current RPS calls for the state to get 70% of its energy from renewable sources by 2030. In addition, by 2040, 100% of the state’s electricity must be carbon-free. That means it can come from either renewable energy or nuclear power. The combination of these two goals makes New York’s RPS the strictest in the nation.

Ambitious as New York’s goals are, the state is making rapid progress toward them. As of 2020, the state was already getting 60% of its electricity from renewables and nuclear power. The remaining 40% comes almost entirely from natural gas.

Energy planning for the future of New York State

Though New York already boasts cleaner energy than most states, it’s not resting on its laurels. To meet the goals of the State Energy Plan, New York is continuing to explore new options.

One of its main targets is offshore wind power. By 2035, the state aims to produce 9,000 MW of energy from offshore wind—enough to power 6 million homes. There are five offshore wind projects already under development in the state. When they’re finished, they’ll supply a total of 4,300 MW of power, putting the state nearly halfway to its goal. They’ll also make New York the biggest offshore wind producer in the nation.

The Great Lakes could eventually supply the state with wind power as well. In 2021 and 2022, NYSERDA did a $1 million study exploring the feasibility of developing offshore wind in Lakes Erie and Ontario. However, the study has not yet been released, so it’s unclear what the future of Great Lakes wind will be.

Your questions about renewable energy in New York, answered

One more thing New York is known for is its no-nonsense attitude. So here’s some straight talk about renewable energy in the Empire State—its present and future.

How much of New York's energy is renewable?

In 2021, 27% of New York’s electricity came from renewable sources. New renewable energy projects in the pipeline are expected to bring that figure up to 66%. That will put the state most of the way to its ambitious goal of 70% renewable power by 2030.

Of course, electricity is only part of the picture. A significant share of the state’s total energy use comes from oil (mostly gasoline) and natural gas. Currently, about 60% of all New York homes rely on gas for heating. Converting homes and vehicles to run on electricity will be an important part of the state’s clean energy transition. Since New York’s electricity is so clean (and getting cleaner), electric cars and homes are much greener than fossil-fuel-powered ones.

Does New York have a plan for future energy use?

New York has not just one plan for future energy use, but several. In addition to its RPS, it has an Energy Efficiency Portfolio Standard (EEPS) established in 2008. By reducing the state’s total energy needs, the EEPS can make New York’s renewable energy targets easier to reach. On top of this, the state has its energy policy, REV, and its State Energy Plan. Together, these two plans set out goals for energy efficiency and renewable energy development and a path to reach them.

What is NYC doing about climate change?

New York City faces serious risks from global warming. Extreme heat, increased rainfall, and sea level rise could all pose a threat to New Yorkers. In 2008, Mayor Bloomberg convened the New York City Panel on Climate Change (NPCC) to advise the city on how to adapt to these threats.

Based on the NPCC’s work, the city developed its Climate Resiliency Design Guidelines in 2018. These guidelines advise architects, engineers, and others involved in construction on how to build for a changing climate. For instance, the guidelines call for no new construction at all in the most at-risk floodplains. In other areas, they call for strategies to protect buildings from flooding. These include floodwalls, restored wetlands, sump pumps, and backup power systems.

One particular resiliency project under consideration is called the Big U. It’s a plan for a series of raised parks that will provide a flood barrier for a big section of Lower Manhattan. This was one of the winning ideas in the U.S. Department of Housing and Urban Development’s Rebuild by Design competition. Launched in the wake of Superstorm Sandy in 2013, it aimed to help cities rebuild stronger to withstand future storms.

Even with an abundance of clean energy options and ambitious strategies, New York still must push the envelope on renewable energy development to hit its climate targets.